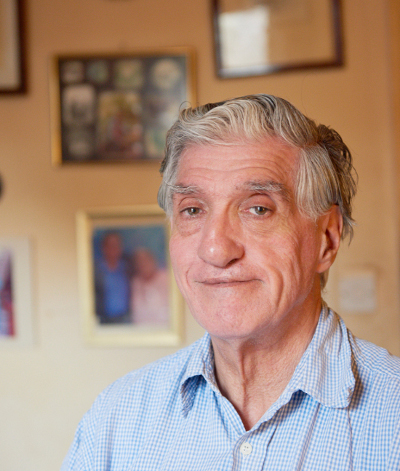 I was pushing my 99-year-old mother in her wheelchair just outside the sheltered accommodation block where she lives. Her handbag, which had her purse in it, was slung over the arm of the wheelchair. All of a sudden I was pushed to one side and this boy snatched the handbag and ran off. Instinctively, I ran after him, leaving my mum in the wheelchair – she was shouting and screaming for help.

"I didn’t know if he had a knife or anything else so I just did as he asked and gave him the money."

I caught up with the boy some distance away by some flats. There was a younger boy with him – about five or six years old – but the lad who’d taken the bag looked around 16 or 17. Face to face with him, I said: ‘Keep the money if you want, but I need the handbag back’. He gave me the handbag back and then told me to hand over the money. I didn’t know if he had a knife or anything else so I just did as he asked and gave him the money. He kept telling me he was sorry and that he had to do it, which seemed odd, and made me think a gang might be involved.

When I got back to the shelter block with my mother, the warden called the police. She was glad I’d got the handback back because it had the keys to the front door of the block in it, and they’re the same for all of the 57 residents.

"I first heard about restorative justice after having a conversation with a lady on Facebook."

After the incident my mother was a bit shaken but she was determined to go out the next day – she said she wasn’t staying in just because of that. The lad was arrested shortly after. A girl from his school had seen what he’d done and reported it. I didn’t have to appear in court – the lad pleaded guilty.

I first heard about restorative justice after having a conversation with a lady on Facebook. I was discussing what happened to me and my mother and she mentioned that I might like to investigate the restorative justice programme. I got in touch with the police again and they put me in contact with the Wandsworth Youth Offending Team (YOT) who were dealing with the case.

Ahead of the meeting I met up with Richard from the YOT. He talked me through the restorative justice process in detail so that I knew what to expect, and he came with me to the meeting, which took place in Buxton. My mother was too frail to go, but I really wanted to meet the offender.

"He was a big lad for his age, but he was nervous about meeting me."

The whole way through the meeting I was upset for my mother, but just couldn’t help feeling incredibly sorry for this young lad – Sam* – especially when I found out he was only 14. He was a big lad for his age, but he was nervous about meeting me. I asked him if someone had made him do it and he explained that what I’d initially suspected was correct – he’d been coerced into committing the crime.

There’s a little square near where the incident took place, with shops on one side. Sam explained that on the day of the incident, someone in one of the shops had told him he had to go and get some money and come back with it – I got the impression it was someone from a gang. They’d given him a time limit and so he went out and did it.

"I didn’t know anything about restorative justice at the time of the incident but, since going through the process, I’d definitely recommend it to other victims."

I genuinely believe Sam was sorry, and the fact that he was willing to meet me says a lot. I felt sorry for him having been coerced into doing such a thing, and I wished him well and shook hands with him before we left.

After the meeting I was glad that I’d had the opportunity to meet Sam and tell him how the incident had made me and my mother feel – especially as I hadn’t had the chance to explain in court.

As my mother hadn’t been present at the meeting, he wrote a letter of apology to her and explained again how sorry he was.

"It gave us the opportunity to ensure that our voice was heard, which we wouldn’t have had otherwise."

Having the opportunity to meet and communicate with Sam has helped us move on from the incident and I also think it helped him. I didn’t know anything about restorative justice at the time of the incident but, since going through the process, I’d definitely recommend it to other victims. It gave us the opportunity to ensure that our voice was heard, which we wouldn’t have had otherwise.

*Sam's name has been changed.

The RJC would like to thank Wandsworth YOT and Tony for sharing his story with us.