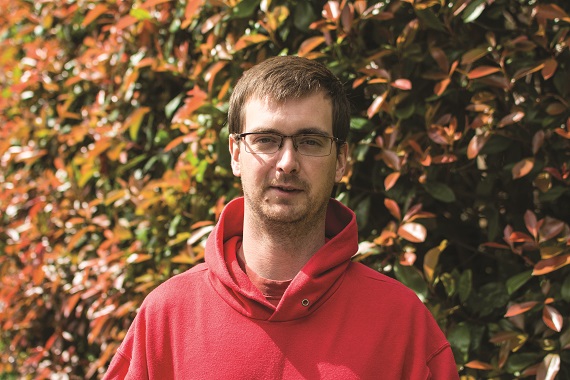 “I was working for Pizza Hut as a supervisor, and I was also one of their drivers, on a scooter. When I’d started the job, the other staff had told me that there were problems with kids in the area throwing stuff at them as they were driving along.

“From week to week this would sometimes be silly, and sometimes be quite dangerous – we had a few people knocked off bikes, things like that. After a couple of weeks of it happening to me I decided it was worth my while to invest in a helmet camera.

“A couple of months after I got the camera, there was an incident on New Year’s Day. One of the drivers had been out, and she came back pretty shaken up. She was a young girl, and she said that the kids were out again.

“As I was going past they were throwing stones and rocks at me… it was pretty terrifying.”

“They had surrounded her and caused all sorts of trouble. I wasn’t too pleased about that, naturally. I whacked my helmet camera on and said that on my next delivery I was going to go in the direction she’d been in and see if I could find them.

“It just so happened - and with hindsight, I wish it hadn’t - that I drove right through the middle of the group. God knows how many of them there were. As I was going past they were throwing stones and rocks at me.

“It’s not the best thing to admit, but it was pretty terrifying. It had happened a few times before, but never as severely. When you have a group of people throwing stuff at you like that it’s worrying - it isn’t pleasant at all.

“He was coming up to me, and he kept squaring up. He was saying stuff like: ‘These are our streets.’”

“Perhaps because it had happened to me before, it tempered my fear a little bit. There were a couple of kids who weren’t wearing facemasks, so I stopped, turned the bike around, and drove back up to them.

“I caught one of them as plain as day on the camera. He was probably the most confrontational person I’d met in a while, and he was massive. He was 13 at the time but he looked more like 18.

“He was coming up to me, and he kept squaring up. He was saying stuff like: ‘These are our streets.’ The thing that really got to me, though, was when he said: ‘This is your fault, that this keeps happening,’ just after a beer bottle had been bounced off my helmet. He said to me: ‘If you left, you wouldn’t be getting this anymore.’

“Personally, I got involved with restorative justice because the way I see it, everyone deserves second chances.”

“I lived and worked on those same streets, so I wasn’t too keen on that. I called the police, then I went back to the shop, and the police came out to me. Pretty much straight away, they told me that restorative justice could be an option.

“These guys weren’t faceless goons, they were kids living in the same streets as me. We should have been able to get along. Personally, I got involved with restorative justice because the way I see it, everyone deserves second chances - I don’t believe in giving up on anyone.

“It became my mission to reach out to the particular guy who’d squared up to me just because the police had managed to catch him, which in that area is quite a rarity. His name was Naseem, and I thought that rather than sending him down the juvenile detention route that I’d try and meet him in a restorative justice conference and see if I could convince him to be a bit different.

“Stuart did lots of preparation to make sure we were both suitable to take part in the restorative justice conference.”

“The police put me in touch with Stuart Wright, a restorative justice facilitator from Remedi. He came to see me, and said we were going to try to make it work. At first, not much happened. Naseem’s dad was keen for him to take part, but he really wasn’t at all.

“His dad kept pushing him then they left the country, probably for about a month. They came back and suddenly Naseem started to play ball. That’s when it all came together, and it moved pretty suddenly from that point on.

“Stuart did lots of preparation to make sure we were both suitable to take part in the restorative justice conference.  The thing that surprised me most was that I thought it was going to be quite censored, and that Stuart was going to give me a big list of things I couldn’t say. But he told me it was OK for me to be angry - as long as I wasn’t aggressive, I could tell Naseem exactly how I’d been affected.

“He said: ‘I realise what I did was wrong,’ and then he went into an explanation of why. And it just knocked me for six.”

“On the day, I didn’t think I was going to be as nervous as I was. The run up to the conference had gone on for quite a long time, as we tried to get Naseem to take part. When he finally started engaging, Stuart was positive but tried not to raise my expectations too much. I was enthusiastic - I wanted to get it done, and I wanted to get there quickly. But certainly on the day I was pretty nervous.

“The conference was taking part in Naseem’s school, and his teacher, who seems to have been a massive influence in his life, dropped him off by the gate so he could walk in by himself.

“He came in, shoulders all puffed up, looking like he wasn’t going to have any of it. But then we sat down, in the room, and straight away he just said sorry. He said: ‘I realise what I did was wrong,’ and then he went into an explanation of why. And it just knocked me for six.

“My advice to anyone thinking about restorative justice is to do it. If you reach out to just one person, then you can break that cycle.”

“I had a whole list of things I wanted to say to Naseem and then I didn’t need to say any of them. His apology completely disarmed me and my anger just went away. I thanked him for coming, and it ended up being a chat.

“Naseem was about to be thrown out of school, but now he’s staying on. He’s doing his exams, and he’s heading for several As. He’s really turned his life around. I bumped into him recently, near the Pizza Hut where I used to work. He recognised me and came up to see how I was doing, and we had a little chat. Two years ago that would never have happened.

“My advice to anyone thinking about restorative justice is to do it. If you reach out to just one person, then you can break that cycle. You might even reach others beyond them if it’s one of the ring leaders. Naseem’s not going to bother people any more. This is one of those cases where it really worked.”

The RJC would like to thank Remedi and Luke for sharing his story with us.

© Restorative Justice Council 2016 – do not reproduce without permission.