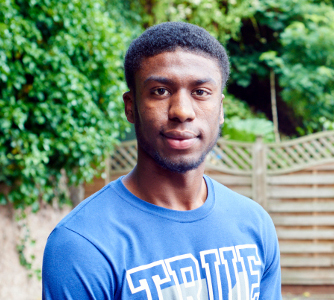 “When I was young my dad was away a lot and I didn’t see him much. I was a good footballer, and I’d been signed to Millwall Football Club but I was released from my contract when I was 15. It was a hard time for me. I had school, I was doing trials for new football clubs and I had two little sisters who I felt I had to provide for.

“When I moved to a new area I started talking to some older boys who lived near me. One day one of them – Darren – offered to drive me to my football training. He started giving me lifts regularly, and I thought I’d made a friend.

“One day as Darren drove me home he said: ‘How would you like to make some money?’ I was interested and asked him what would be involved – he told me he bought and sold jewellery. About two weeks later he phoned me and asked if I was still interested. I said I was, and he turned up in his car with a girl I didn’t know. He said we were going to go to see a couple who were selling a ring.

“We pulled up outside a house. Darren told me he would stay outside and that I should negotiate with the couple selling the ring, then say that I was making a phone call and go outside to speak to him about the price. Me and the girl went into the house – Darren told us to pretend to be married.

“The couple gave us a price and I started negotiating. When I went outside, Darren was standing there and he had put a long jacket on. I told him the price and he said: ‘We’re going to have to rob it.’ I said I wasn’t going to do that but he just kept saying: ‘Yes you are. You’re going to rob it.’

“Darren pulled a gun out of his jacket, put his arm around me and pushed the gun into my hand. He told me the gun wasn’t real and said: ‘You’re going to take this and go and get the ring. You don’t have to do anything, just make them scared.’ I said I didn’t want to do it but he just told me I was going to do it and he pushed me back into the house and followed me in.

“The couple just froze when they saw me come back in with a gun and someone they hadn’t seen before. Darren had put a hood over his face and they were obviously shocked.

I had the gun in my hand but it was down at my side. As soon as we entered the room, the girl we had come with picked up the ring and ran out of the house with Darren. As they left, they locked the door and I realised I was trapped.

“The couple were pleading with me and I was trying to talk to them and answer their questions but I still had the gun in my hand. Every time they made a movement, I lifted the gun. I knew it wasn’t real, but I was scared. I was in their house and I didn’t know what to do.

“Suddenly something clicked in my head and I knew I had to get out. I got as far as the street but someone apprehended me. I lay on the floor and told them I wasn’t fighting, and they called the police. It was the first time I’d been arrested, I’d never even been in a police station. That’s the most shocking thing about the situation – I went straight in at the deep end. I was scared and I didn’t know what to do. All I could think of was how my mum would react.

“I received a five-year sentence, reduced from 10 because I admitted guilt and because of my age. I tried to make the best of my time in prison. I did a football coaching course and I also started to take part in a mentoring scheme for new prisoners.

“Two officers at Feltham told me about restorative justice after I’d been in there for about eight months. At my trial I’d had a number of character references from my football coach and my teacher.

“I felt like I’d been carrying a weight on my shoulders since the crime – I couldn’t be at ease without apologising to those people face to face and explaining what had led me to do what I did. They saw me as someone I wasn’t and I wanted to relieve myself of that stress, that burden I was carrying.

“Before the conference, the facilitator talked me through the process explaining that he would ask questions of me and the victims and we would be given the opportunity to ask each other questions. The facilitator made sure everyone got a chance to have their say and that everyone could see each other’s point of view.

“The conference was really emotional – I cried and so did my victims. I apologised many times and I also explained honestly what had happened and how I had got into the situation.

They told me how their family had become scared in their own home, and I realised that one moment of me not thinking straight had changed their lives. Talking to them made me think about how I would feel if that had happened to me or my family. It really affected me – I saw the knock-on effects of my actions, not just on my victims but on their family as well.

“I thought they might be angry but they were really sympathetic. My brother was there for support and he explained how it had been hard for my family without me at home. That made me think about the effect I’d had on my own family. My mum was coming to see me every week and it was draining for her to see me in that situation.

“I was filled with remorse and sorrow. I’m not someone who expresses emotion easily but during the conference I did, and it was a relief. Out of the whole process, the thing that had the most impact was when my victims said they would forgive me for the crime I’d committed. That’s when I felt that burden – that weight – lift from my shoulders. I didn’t go into the conference expecting forgiveness and that was the part that really brought me to tears.

“Towards the end of the conference we all spoke really freely. No one held back and the mood really lightened. I think we all got clarity and closure over the situation. We didn’t come to an outcome agreement at the meeting but I did speak to the facilitator afterwards and offered to save some money when I was released and pay for my victims to go on holiday.

“Since being released I’ve started studying for my BTEC extended diploma in sport. I’ve also picked up my football career and have been signed by Bromley Football Club. It’s going really well, and the under 19s who I play for won our conference league.

“Everyone has the ability to change and restorative justice is a way of helping people to move on with their lives.”

The RJC would like to thank HMP & YOI Feltham and Jason for sharing his story with us.