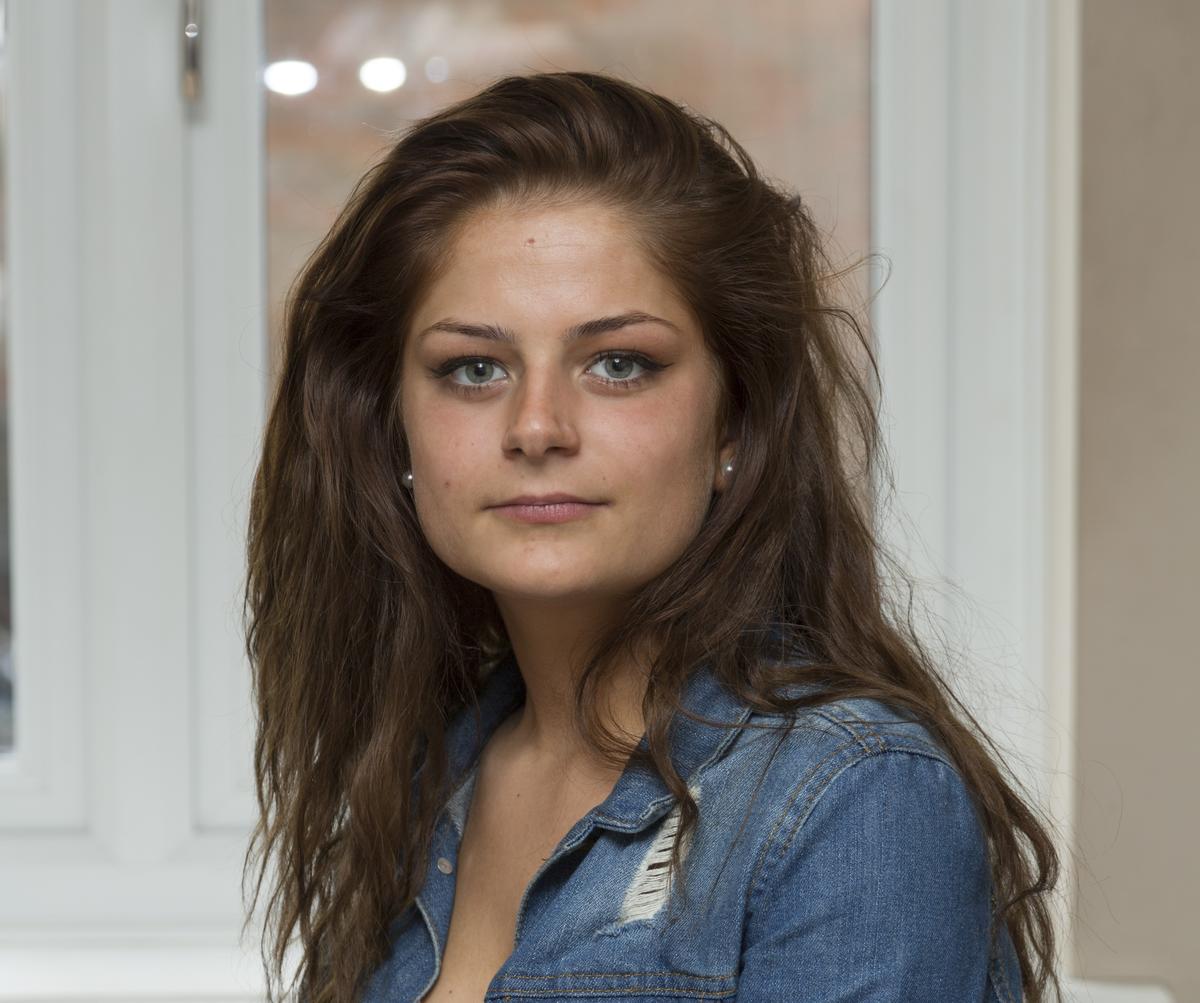 Demi was left badly hurt after she was attacked by Lauren, following a fight Demi was in with a mutual friend. Here, Demi and Lauren explain how restorative justice brought them together to repair the damage done that day.

Demi: “I can’t remember why me and my friend Hannah were arguing in the first place. It was just over something really stupid. She followed me as I was leaving the park and was being really mouthy. She slapped me, so I grabbed her by the hair and pulled her to the floor. She started crying and told me to get off her. She walked off down the road and I went home.

“I went back to the park later that day and was sitting on the swings with a friend. When I looked up I saw about five people coming towards me, including Lauren. She asked if she could speak to me in private, so I went to sit with her on a bench. It felt like a normal conversation about what had happened, but she got annoyed when I said that it didn’t really have anything to do with her. She said it did as Hannah was her friend, and then she started getting really aggressive with me. At that point, her friend came over and said: ‘If you don’t beat Demi up now, Lauren, I’ll get someone else to come over and do it.’ I was still sitting down, and Lauren started getting really in my face, so I did the same, as I was getting intimidated.

“I saw her foot coming towards my face and I just felt terrible pain and blanked out.”

“I got my phone out to call my mum. As I walked away to try and hear my phone I felt my hair get pulled back and she pulled me to the floor and punched me. I could feel her let go of my hair, and I could hear people around me laughing, so I tried to get back up. Then I saw her foot coming towards my face and I just felt terrible pain and blanked out. After that, I can’t really remember what happened, except that I ended up leaving the park with two random people."

Lauren (pictured): “I’ve been in loads of fights. They’re the only thing I’ve ever been arrested for. I was an angry kid and I took that out on the wrong people. Anyone really. On the day of the fight with Demi, I was in the park. My friend Hannah was there and was crying after having a fight with Demi. I didn’t see Demi often but I had fallen out with her and her mum a few years ago. When I saw Demi in the park later that day I went up to and asked to speak to her about Hannah.  She told me it was not for me to get involved, which I didn’t like as she was my friend. She stood up to me and was acting aggressive. In the end I hit her. It escalated from there really.”

A husband and wife who saw the incident manged to pull Lauren away and walk Demi home. The police came over to Demi’s house afterwards and she gave a statement and had photographs taken of her injuries. A few months later, Paul Taylor from West Essex Youth Offending Team got in touch and asked Demi whether she would be interested in restorative justice.

“Later on, I started to feel bad, because it wasn’t my place to do what I did.”

“Later on her brother and her Dad, who are big men, turned up at my house threatening me, saying they weren’t afraid to hit a girl. At that point I didn’t care what had happened, because my adrenaline was still going. Later on though, I started to feel bad, because it wasn’t my place to do what I did, even though everyone around me told me not to worry about it. I felt that she didn’t deserve it. She was bigger than me, but she was also younger than me. The police came round a few weeks later and I was arrested. And a few weeks after that I was arrested again for breach of my bail conditions, and I was given a tag. A restraining order was put on me contacting Demi.”

“I wanted to try restorative justice. I needed something to put an end to the tension, so I could go out again.”

Demi: “When it first happened, I wasn’t upset, I was just really angry. I was angry at myself because I couldn’t do anything to protect myself. I was angry at her for doing it, obviously, but I was also angry at my friends who were there but didn’t do anything to help, one of them I’d known for over ten years. All my friends knew about it, but no one came to see me afterwards. I decided I wanted to try restorative justice as I wanted to know why Lauren did it and I needed something to put an end to the tension, so I could go out again."

“I always thought, no one cares about how I feel, so why I should care about how they feel.”

Lauren: “Paul Taylor asked me if I wanted to take part in restorative justice. I wanted to give it a go as I was turning my life around. I was now at college and had a job. Me and Demi also had a few shared friends and there was a lot of stirring going on in the background. Everyone knows each other around here. People were telling things to Demi about me which weren’t true. That’s why I’m not really mates with girls, because it can get really bitchy.

“Before the meeting, I did victim awareness and some other activities with Michael, my caseworker, so I could understand Demi’s perspective. It opened my eyes a bit, as I never really thought about these things before. I always thought, no one cares about how I feel, so why I should care about how they feel.”

“Before the end of the meeting, she apologised to me. I even saw her later that week in McDonald's and she said hello.”

Demi: “I didn’t really feel nervous going into the meeting, as I knew it was a controlled environment and I was confident. It was best that it happened that way. Me and Lauren both agreed before that we wouldn’t have parents in the conference itself. I wanted to do it on my own. When I first walked in, Lauren seemed a bit cocky, but she soon settled down a bit and she started talking a bit about herself. She explained that she didn’t have the support around her that I did, which made me think a bit. Before the end of the meeting, she apologised to me for what she had done and said she felt bad about it. I even saw her later that week in McDonald's and she said hello.”

Lauren: “I was kind of nervous on the day of the meeting, as Demi’s mum was outside, and I wasn’t sure what she’d do. It was awkward at first, but after a few minutes everyone relaxed and were able to say everything they wanted openly. We spoke about how we felt, what had happened in each other’s eyes, and why we both thought it had happened. We listened, and by the end of it, we both understood each other point of view. She understood that I didn’t do it for no reason, but that I still regretted it.

“Meeting Demi face to face was the hardest part of what happened.”

“When I left the meeting I was quite pleased. I didn’t think I’d get anything out of it, but I did. I thought she was just going to try to get me into more trouble and it was going to turn into a screaming match and I’d end up storming out, but meeting her face-to-face allowed me to see how what had happened had affected her, and I didn’t want her to feel like that. Meeting Demi face to face was also the hardest part of what happened, as I felt bad, but I couldn’t admit it. I don’t care about being arrested, I’ve been arrested lot of times, but I felt guilty for the pain I caused her. When I saw the pictures of her injuries my heart sank. I thought to myself, ‘did I actually do that?’ I couldn’t deal with that, and it made me want to do the meeting."

“It gave me the opportunity to move forward.”

Demi:  “Restorative justice changed everything for me. It allowed me to deal with all of the emotions I had going on after what happened and it gave me the opportunity to move forward. Paul was a great and really approachable. If there were any problems, I could contact him for advice, and it was very comfortable in a way I never expected.”

Lauren: “Before all of this, I didn’t care about anything. I didn’t go to school. I just spent my time causing trouble, as it was a release and something to do. Everyone expected me to end up in prison or a crackhead, and it just made me want to go out and be like that. Having people support me has really helped, though. Now I’m at college and doing a job I enjoy, it makes me feel totally different about myself and that I can achieve things. I was only going to do one day a week of voluntary work in hair and beauty, but now I’m doing three and even getting my own clients. I thought I was going to need to go to prison to sort myself out, but it’s all starting to come together now.”

The RJC would like to thank Demi, Lauren and West Essex Youth Offending Team for sharing their story with us.

© Restorative Justice Council 2018 – do not reproduce without permission.