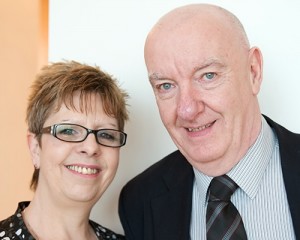 In May 2001, Christopher Donovan and his brother Philip were on a night out together when they were attacked by a gang of youths. Philip was beaten unconscious, and when Christopher tried to help him, he was pulled to the ground and repeatedly kicked in the head. He was then left unconscious in the middle of a four-lane road, where he was hit by a car and dragged for forty feet.

Christopher’s parents, Ray and Vi, were awakened shortly after midnight by two policemen at their door. Ray instantly knew something was wrong: “My heart was beating so fast I thought it would jump out of my chest. Then the policeman told us that Chris and Phil had been involved in a fight and Chris was badly injured.”

"All I could feel was rage and anger... and it wasn’t doing anything, it was just hurting me."

In a state of panic and shock, they were driven to the hospital where their sons had been taken. Philip was relatively unhurt, but Christopher was in the operating theatre - most of the bones in his body were broken, and there was a serious risk of brain damage.  He died on the operating table. When the doctors broke the news, Vi ran from the room, and Ray collapsed on the floor, screaming.

Vi described the days that followed: “All I could feel was rage and anger. I went home and I smashed my kitchen up. I just lost it completely, because I was riding on all of that rage. I was drinking a cup of poison and hoping it would poison them, and it wasn’t doing anything, it was just hurting me.”

Three of the fourteen gang members who had attacked Christopher were arrested. A year later, after a six week court case, all three were convicted of murder. Their ages were 15, 16 and 19. The older two were given life in prison with a minimum of nine to ten years; the youngest was given a minimum of six years. For Vi, being in court with the offenders’ families made her think about the wider impact of the tragedy: “You just realise everybody’s losing here. They’ll get their sons back physically one day, unlike us, but it will never be the same for any of us.”

"He said: ‘I was a fifteen year old coward. I left your son on the road, and for that, I’m sorry.’ And that meant the world to us."

In 2003, Ray and Vi were contacted by one of the offenders who said that he wanted to meet them and say sorry. The meeting never took place, but it prompted the Donovans to write to all three young men offering their forgiveness, and suggesting that one day they might meet.

Nine years after Christopher’s murder, the Donovans were put in touch with CALM (Confidential and Local Mediation), who were able to facilitate a meeting with one of the boys who had murdered their son. Ray and Vi were finally able to sit down with one of the people who had caused them so much pain.

Ray said: “When he walked into the room, I put my arms around him – he wouldn’t let go of me. He kept whispering ‘Sorry’ and ‘Thank you’. He said: ‘I was a fifteen year old coward. I left your son on the road, and for that, I’m sorry.’ And that meant the world to us. We got answers to our questions.”

"“Hearing Ray and Vi give me permission to have the best life that I can made me feel like a human again."

For Vi, the encounter was equally moving: “I surprised myself, and I hugged him. Because I heard the word ‘sorry’, I heard the word I wanted to hear all those years ago in the court. He admitted what he’d done to us, and that was fantastic, to hear the truth. He released me. And I released him because I told him that I want him to forgive himself, and I forgive him.”

In 2012, the Donovans were able to meet Stephen, another of the young men convicted of killing their son. Vi said: “I saw shame, I saw admittance, and I saw the truth in his face. I saw his tears.”

Ray said: “We want him to live the life Christopher hasn’t got. If he’s changed his life and he’s moved on, it’s better than having a park bench with a plaque on it.”

For Stephen, the meeting was a turning point: “Hearing Ray and Vi give me permission to have the best life that I can made me feel like a human again - a good person, with a clear focus and a positive future. I realise now that I owe that to Christopher, and I owe it to myself, too.”

"We got answers to our questions and the truth. Now we hope we can leave those questions in the past and move on into the future."

Finally, in March 2013 Ray and Vi met the third of the young men convicted of killing their son, completing a journey which had taken 12 years. Ray said: “When we met all three offenders and told them what it was like for us and the things we went through and are still going through and told them about the ripple effect and how it affected everyone from our family to the community, it made them realise the amount of people that were affected by their actions.

“Then to hear them say sorry made us both feel like a ton of coal was taken off our back. We felt free for the first time because we got all we ever wanted. We got answers to our questions and the truth. Now we hope we can leave those questions in the past and move on into the future.”

Ray and Vi have become prolific campaigners for restorative justice, giving talks in prisons, schools, probation services, YOTs and youth clubs across the country. They also take part in face to face meetings with gang members, and run workshops on the benefits of restorative justice for victims. Ray and Vi’s own charity, the Chris Donovan Trust, was set up in memory of their son, and aims to educate prisoners and young people on the impact of violent crime.

The RJC would like to thank Ray and Vi for sharing their story with us.