After Aaron Sampson, 15, was robbed by some boys who’d been bullying him at school, a restorative justice meeting gave him a chance to regain his confidence. Here, Aaron and his mum Linda tell their stories.

Aaron: "I was walking to my friend’s house to play football. As I turned a corner, I saw three boys from my school. I’d had problems with these boys before. When they saw me, they pushed me up against a fence, and started asking me what I had in my pockets. They pushed me down to the ground and started going through my pockets. All I had on me was my phone, which I’d got for Christmas, so they took that. 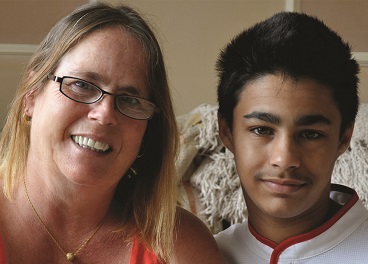 "I couldn’t fight back – there were three of them. I just ran to my friend’s house and we called the police."

Linda: "Aaron’s had a troubled school life. He’s not a big boy, and he’s had some medical problems, including very severe eczema. He was picked on constantly from about Year 4 at school, and one of the lads who robbed him was one of the bullies who’d been picking on him. He’s always been very timid and quiet, but this past couple of years he’d really started to come out of himself. The robbery was a real setback.

"Things at school had been bad for about a month. This particular bully had beaten Aaron up, and threatened to knife him, so he’d been excluded from the school. That day, they saw Aaron walk round the corner and obviously thought, 'Right – we’re going to get him.'"

Aaron: "The police found the boys about half an hour later, near where they’d robbed me. Anthony*, the one who was carrying my phone, pleaded guilty. He and one of the others were expelled from my school, but I still had to see the third boy there. I was worried at first, but I didn’t think he’d cause trouble without his mates there. Everyone was talking about what had happened. I tried not to let it get to me, and I knew my friends would look out for me."

Linda: "About a month after the trial, we got a letter from Nadia, the victim contact officer at Luton Youth Offending Service asking if Aaron wanted to meet Anthony. Aaron thought about it for about a week. I explained to him what would happen, and how the meeting would work, and he also discussed it with his form teacher at school."

Aaron: "I was scared at first because I didn’t know what Anthony was going to say, or what his reaction would be. In the end, I decided to meet him because I wanted to face my fears. I wrote some questions down. I really thought about them, because I wanted to get the best possible answers. They were basic questions like why did you do it? What did you think would happen afterwards – it’s not like I’m never going to see you again?"

Linda: "I hoped the meeting would give Aaron more confidence in himself and his abilities. He’s been through a lot over the years. On the bus on the way to the meeting, he was very quiet. He was very nervous and shaky going in. We thought that Anthony would already be in the room with his parents, but Nadia had arranged it so that we were in the room first. That made a big difference to Aaron, because he was able to get comfortable before facing Anthony."

"For me, the point of the meeting was so I could move on."

Aaron: "On the way to the meeting I felt alright, but as soon as I saw Anthony’s face, it started to get a bit nerve-racking. There was a big circle of people, and we all introduced ourselves. I asked Anthony, 'Why did you do it?' His answer was that he wasn’t the main person – it was his mate’s idea, and he didn’t think his mate would go through with it. He was really apologetic, but I didn’t really want an apology. For me, the point of the meeting was so I could move on."

Linda: "When Aaron asked Anthony how he’d thought he was going to get away with it, he said, 'I didn’t think you’d call the police.' He looked remorseful, and he told us he’s not hanging round with the same boys any more, and has more focus on what he wants to do with his life."

Aaron: "Since the meeting, it’s still in the back of my head, but it’s not worrying me as much now. If what Anthony said in the meeting was true, I know he won’t bother me any more."

Linda: "I would encourage other young people to meet their offenders to show them the real consequences of what they’ve done. Aaron has a sister at the same school, so it had a knock-on effect on her – she worried that she might get targeted next. Aaron’s dad’s reaction was that we shouldn’t let him go out any more in case something were to happen to him, but that wouldn’t work – you can’t wrap teenagers in cotton wool. There’s a whole barrel of consequences to do with the child and their family. It’s the whole package – it’s not just the one act."

"I'd tell my mates to do restorative justice.  It gives you a chance to stand up for yourself."

Aaron: "I’d tell my mates to do restorative justice if it came up. It’s a chance to ask as many questions as you want, and I think it’s good to get information. It gives you a chance to stand up for yourself."

Linda: "Before meeting Anthony, Aaron was quite frightened about going out of the house. I was having to walk him to and from school, just in case someone was waiting outside for him. That’s changed now. He goes and plays football with his friends, and he’s better about going out on his own. He’s got more confidence since the meeting. He’s moved on."

*Anthony’s name has been changed.

The RJC would like to thank Aaron and Linda for sharing their story with us.