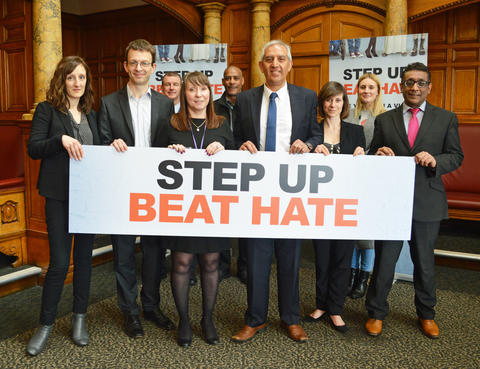 On Thursday 23 March the RJC, Remedi and local partners in Derbyshire jointly launched a new campaign in support of victims of hate crime.

The aim of the Step Up Beat Hate campaign is to increase awareness of the benefits of restorative justice among past and current victims of hate crime. It also supports Derbyshire’s Police and Crime Commissioner (PCC) Hardyal Dhindsa’s goals to improve support to victims of hate crime across the county and encourage more survivors to report their experiences to police.

The project has been part-funded by the Home Office’s Hate Crime Community Project Fund with the PCC, City and County Councils contributing additional funds. These organisations are critical to the work to tackle hate crime in the city and the county and they decided to augment the budget in order to deliver an awareness campaign to ensure that victims of hate crime know how to access support services of any kind.  These services are available whether the incident is reported to the police or not.

Jon Collins, the chief executive of the RJC, said: “We hear first-hand from victims of hate crime how restorative justice has given them a voice and helped them to move on after a crime. Being able to tell the offender in person what the effects of their actions have been is empowering for the victim and a wake-up call for the offender.

“The Step Up Beat Hate campaign is a great opportunity for victims in Derbyshire to access restorative justice, and we hope many people will benefit from it.”

Commenting on the launch, Mr Dhindsa said: “This is a great opportunity to provide better support for victims of Hate Crime.  We are raising awareness of the difference types of support available to them and, in doing so, expand the use of restorative justice which has proved to be a highly effective way of helping them to move on from their experience.

“Restorative justice can only happen if someone is willing to step up and speak about their experiences and we all appreciate that this can be a daunting thing to do.  That is why we are all working together to make services as accessible and as widely recognisable as possible.

“No-one should experience hate crime, but if they do, I urge them not to suffer in silence but to report it to police who will be ready to listen and to act.”

Steve Jones of Remedi said: “If we can raise awareness of the different types of support available, including restorative justice, we will encourage more victims to come forward.  For instance, victims can access emotional and practical support through Derbyshire Victim Services, or receive telephone support from Stop Hate UK.  We can help people to report incidents to the police if they wish to go down that route, or help to identify a local community group which can provide the appropriate level of support.”

The project, which covers Derby and Derbyshire, will involve victims of all types of hate crime including age, disability, gender, race, religion, sexual orientation or transgender identity, Islamophobia and alternative subcultures. It includes victims of hate crimes committed by both adults and young people.

As part of the pilot, the partners will run an advertising campaign on buses, taxies and in public sector premises including hospitals and GP surgeries to raise awareness of restorative justice as a recovery tool for hate crime victims.

Project co-ordinators will also work with Stop Hate UK, which provides a 24-hour hate crime reporting service in Derbyshire, to access and analyse crime data in the search for hate crime cases which are suitable for restorative justice.