I was delighted to host fellow restorative practitioners from South Korea as they undertook a UK Learning Tour. Working closely with the Korea Peacebuilding Institute (KOPI) we welcomed 28 restorative practitioners, researchers and academics to the UK in Mid-January. The purpose of the tour was to better understand how we have developed restorative practice across a range of sectors. To this end, we visited a range of organisations from across the UK including those working within criminal justice, education and health settings. There was also a keen interest to learn about how the UK is progressing with developing a restorative city model of practice. Over a 10-day period we visited 15 organisations and hosted two knowledge exchange seminars. We travelled a total of 1438 miles visiting Bristol, Coventry, Nottingham, Wakefield, Liverpool, Belfast and London. 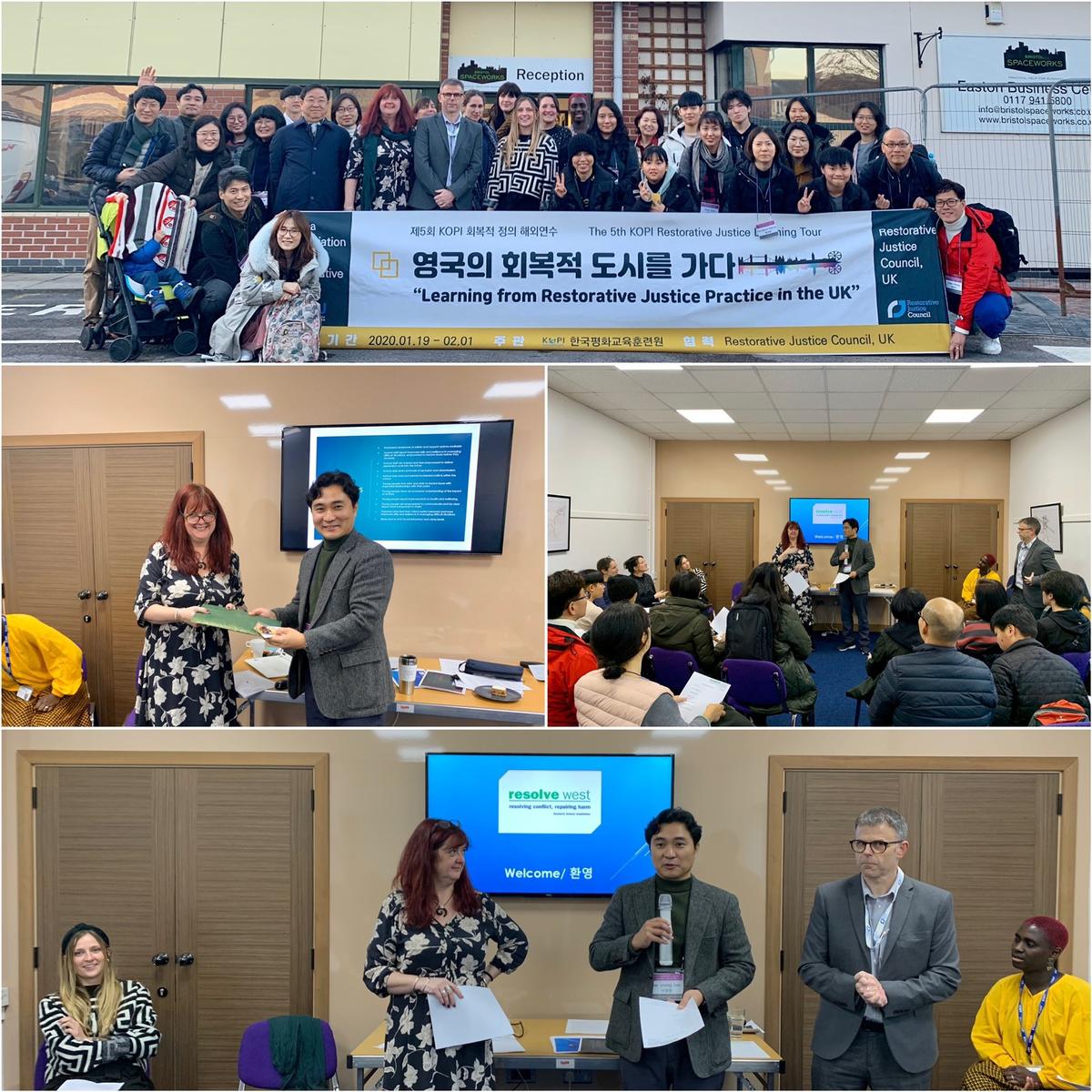 Our tour started in Bristol with a visit to Resolve West. We met with several of their practitioners who were working across a range of projects. It quickly became apparent that despite the cultural differences, many of the underlying issues which lead to conflict are the same.

We left Bristol to head to our next destination! 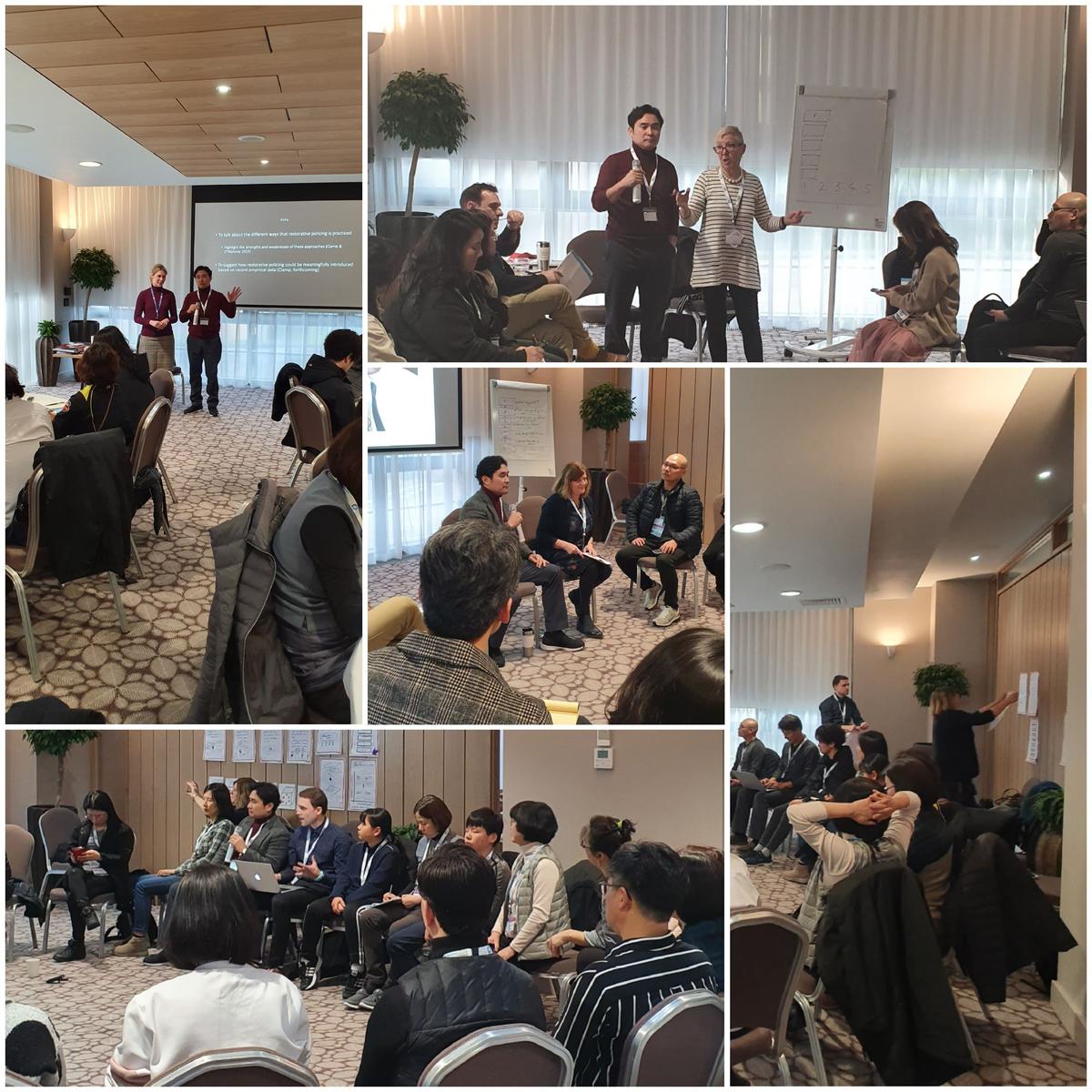 Day three was the first of our planned knowledge exchange seminars which was held at Nottingham University. We focused on restorative policing in the morning and restorative practice in education in the afternoon. We had four amazing presenters, Dr Kerry Clamp, Dr Belinda Hopkins, Tom Procter-Legg and Andy Williams. Their brief was to provide an interactive day of learning and knowledge sharing. It would be fair to say that they certainly delivered!!

Our morning session was led by Dr Kerry Clamp who focused on restorative policing models. This is an area of work that our colleagues from South Korea are currently engaging in and so it was useful to share the work and research being undertaken in the UK.

I was very aware that for the most part, the tour focused on meeting practitioners and service providers. Whilst this gives a valuable insight into the work we are undertaking in the UK, hearing from service users brings our work to life. We were privileged to be joined in Nottingham by Sue Donnelly, a volunteer for the RJC. Sue’s story is difficult to hear, it most certainly brought tears to the eyes of the group. We all listened to the positive impact that participating in a restorative conference had on Sue and her family and it really brought home the impact that high-quality restorative practice can have.

The afternoon was led by Dr Belinda Hopkins who delivered an engaging, energetic and interactive session on implementing restorative practice in education using Transforming Conflict's 5 Core Beliefs. Delivering alongside Belinda were Tom Procter-Legg (Iffley Academy) and Andy Williams, both of whom have implemented highly successful practices within their schools. After the group had recovered from the awe of having headteachers in the room, they listened with great interest on how theory and training translate into the school environment.

After a traditional Korean meal in the evening and what seemed like a couple of hours sleep, the group moved on to the next leg of our tour, visits to Wakefield and Liverpool. 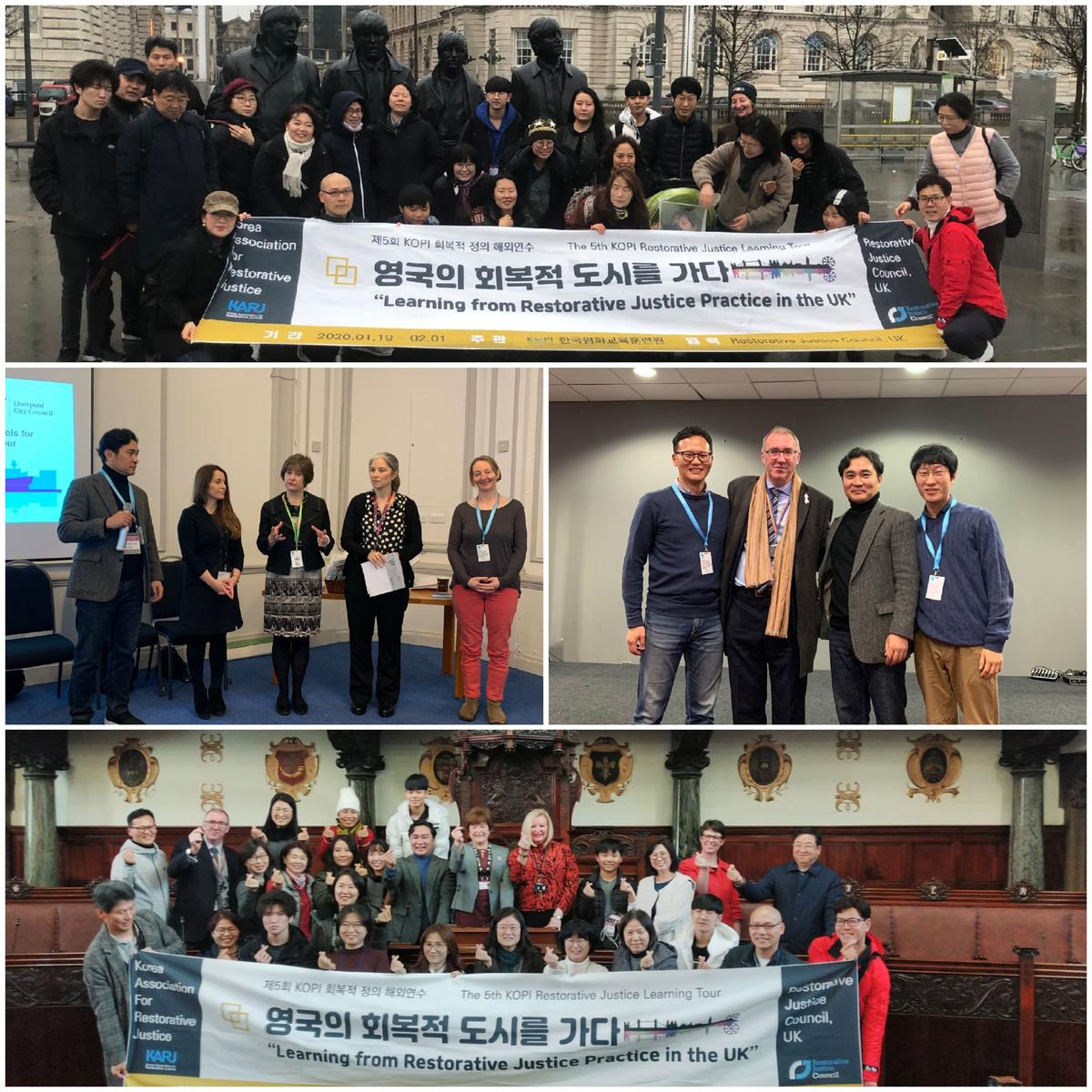 This part of the tour was organised and hosted by Chris Straker and Restorative Thinking. The group spent time with both Wakefield and Liverpool councils before having the opportunity to visit three schools across the Liverpool area. Visits to both councils were well recieved by the group, alongside tours of the council bulidings, they were able to speak to council officials about the progress being made in developing and embedding a restorative city ethos. The second afternoon was spent visiting three Liverpool Schools; Holy Family School, St Edwards College and Bank View School.

Splitting into smaller groups we were able to meet with staff and pupils at each school to better understand how restorative practices were being used. This included visiting classrooms, observing circles and speaking with pupils about thier experiences of learning within a restorative environment. Feedback from the group was extremely positive, they were overwhelmed by the welcome they received by both councils and found the school visits inspiring.

From Liverpool, we travelled to Belfast where we spent time with Northern Ireland Alternatives. 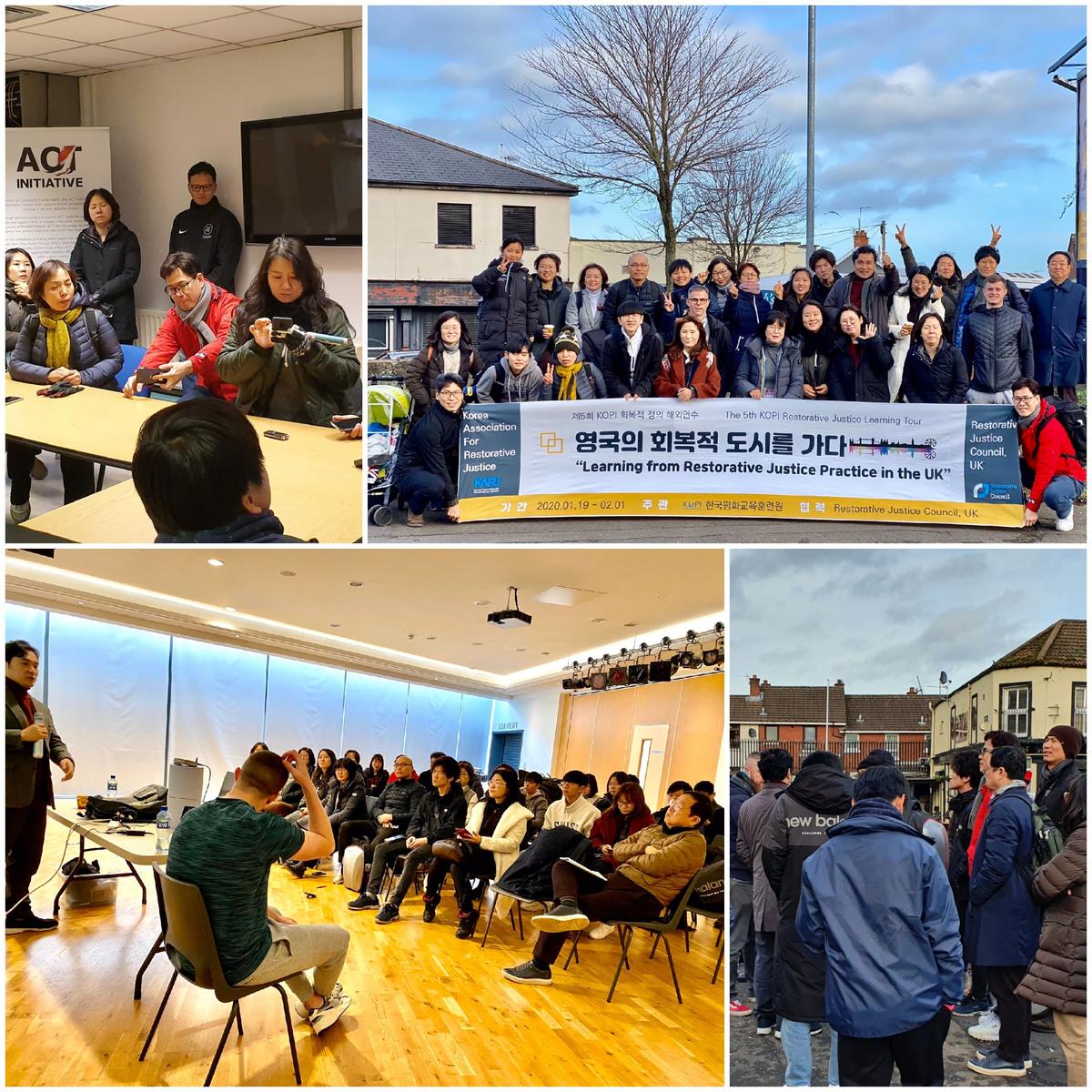 Our first day in Northern Ireland was spent visiting the Giants Causeway and the Corrymeela Community. After a long and rather choppy ferry crossing from Liverpool to Belfast, a brisk walk around the Giants Causeway was most welcomed. The group spent the afternoon visiting the Corrymeela Community. Founded in 1965 by Ray Davey, along with John Morrow and Alex Watson, Corrymeela is an organisation seeking to aid individuals and communities that suffered through the violence and polarisation of the Northern Irish conflict.

We started our second day with a visit to Belfast City Hall before heading off to R-City café where we met with staff and service users to find out more about the unique work they were undertaking to build bridges between two communities in North Belfast divided by interfaces and religion.

The afternoon was spent with Greater Shankill Alternatives who provided us with a tour of the Shankill Road. I had some knowledge of the conflict in Northern Ireland but as we walked down the Shankill Road, I became more and more conscious that  I had very much been sheltered of the true nature of the troubles. Visiting the many memorials at both Shankill Road and at the Falls Road was a truly emotional experience and, for me, one of the most poignant moments of our visit to Belfast. 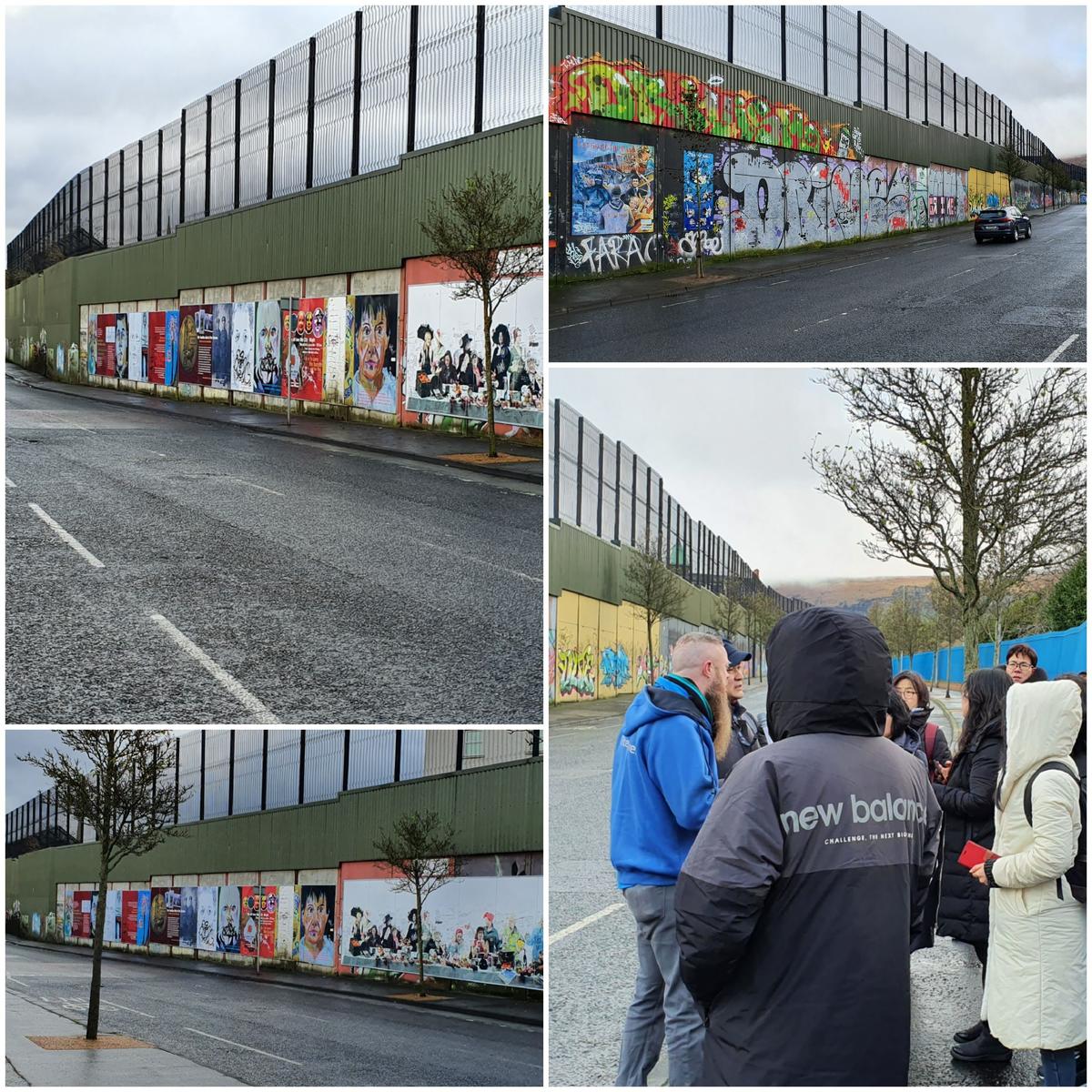 Day three started off back at Greater Shankill Alternatives where we met with Tom Winston, Deborah Watters, Glenn Millar and practitioners from across three of the Northern Ireland Alternatives projects. It was amazing to see 60+ practitioners sat in a circle, sharing practice. It was fascinating listening to Tom and Deborah speaking about their struggles in the early days of setting up Greater Shankill Alternatives; their passion, dedication and perseverance in overcoming these struggles has led to the creation of an organisation which is benefiting many members of the community.

Following our morning at Greater Shankill Alternatives, we walked down to the peace wall which sperates the Shankill Road from the Falls Road. I was not sure what to expect, but it certainly wasn’t an overbearing metal wall!!

From here, we travelled down the Falls Road to our next destination. During the afternoon we split into two groups, one half visiting East Belfast Alternatives and the other South Belfast Alternatives. I joined the group visiting South Belfast where we had the opportunity to speak with representatives from Belfast Council, Northern Ireland Police and service users. It was interesting to hear how organisations were working together to create more peaceful communities. Service users shared emotional stories of how accessing restorative processes had started to repair the harm caused to them and their families. 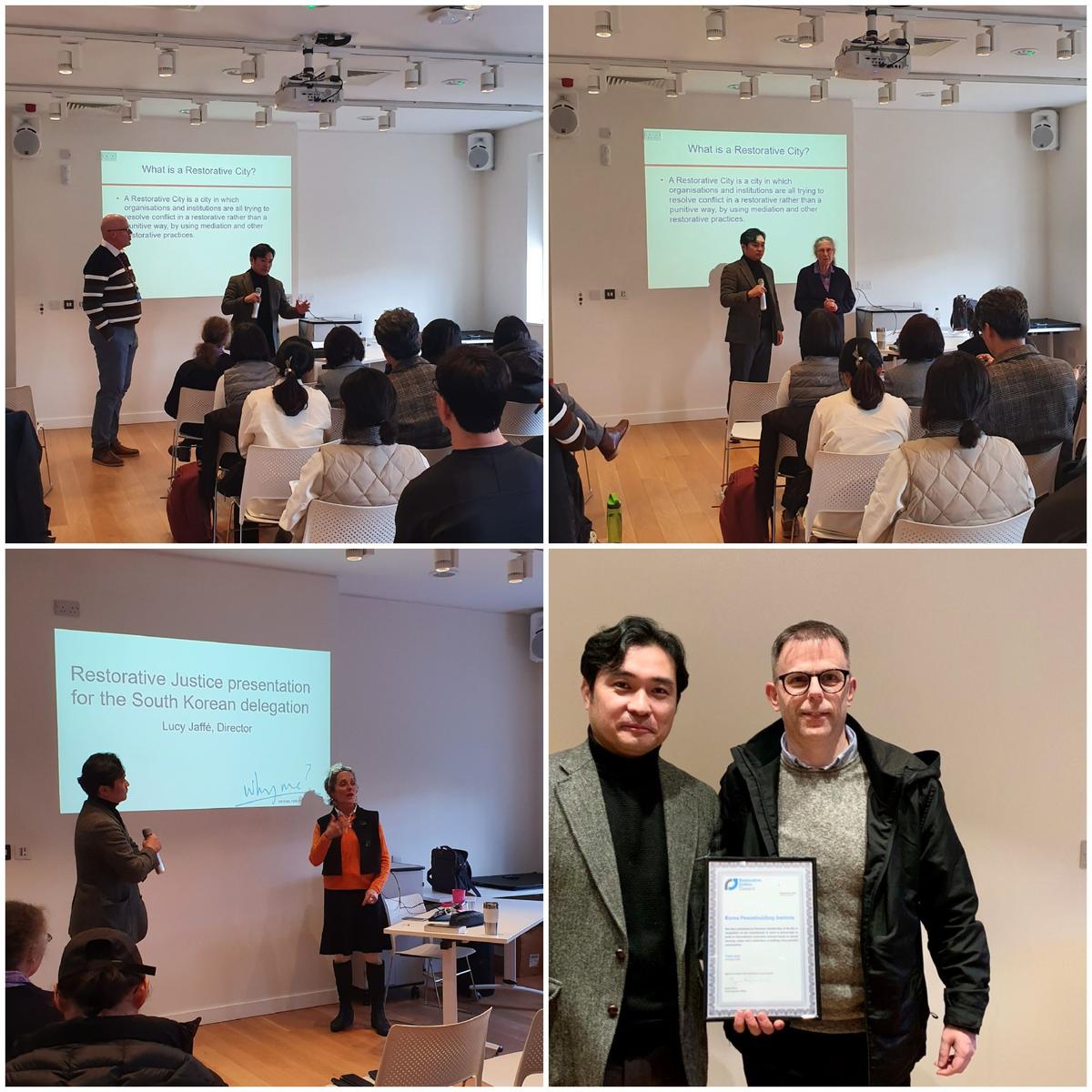 Following an early morning flight back to London, we headed off to the Bethlem Museum of the Mind for our second knowledge exchange. We were joined by Finlay Wood from South London and Maudsley mental health service, Dr Marian Liebmann and Lucy Jaffe from Why-Me?.

Finlay spoke about the restorative work being undertaken by SLAM, an area of practice that the group were particularly interested in. This was followed by a discussion with Dr Marian Liebmann on developing restorative cities, an ideal opportunity to follow up on the questions raised from our visits to Bristol, Wakefield and Liverpool. We concluded our knowledge exchange with a presentation by Lucy Jaffe who spoke about the work being undertaken by Why-Me? on hate crime. Members of the group listened with interest; particularly given that South Korea's population was becoming more diverse and the number of reported cases of hate crime were likely to increase.

This concluded our UK learning tour! I left London feeling extremely proud that we had showcased some of the outstanding work being undertaken across the country. There was certainly more that I would have liked to have done during the visit but sadly this was not possible. I also learnt a great deal during this tour! Most importantly that distance is not be a barrier to sharing good practice. I also learnt the value of community; I am sure I am not alone in having a tendancy to focus on my own priorities and immediate surroundings. Spending time with the group, I learnt that as a community we are stronger, we can acheive more and our voice is louder. I certainly feel that during this tour the RJC has formed a strong relationship with our colleagues at KOPI. I am sure this relationship will present many future opportunities for us to collaborate. We are already discussing the possibility of another knowledge exchange focused on restorative practice in education later in the year and the possibility of arranging a similar RJC Learning Tour in early 2021!!

This tour would not have been possible without the support of a long list of individuals and organisations. I would like to extend my sincere thanks to you all.

The Restorative Bristol Board

Thank you also to our KOPI friends for a truly amazing experience!! 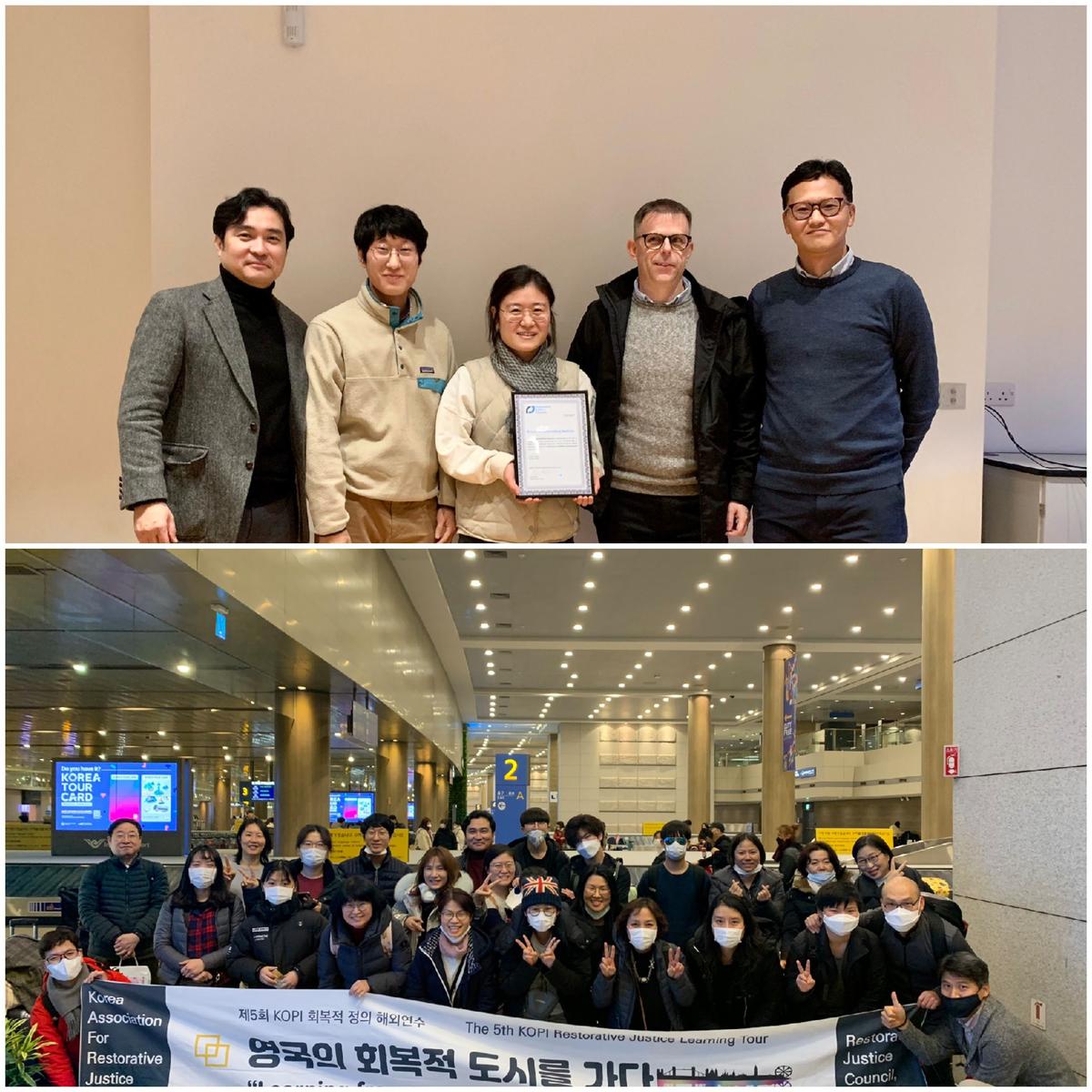